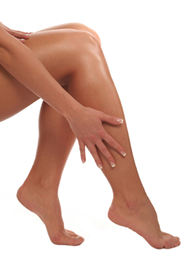 Both men and women may desire surgical improvement of the contours of their calves. For men, calf augmentation is often requested to enhance the appearance of calves as one is developing a muscular physique. In these men the calf areas have not responded as well to weightlifting and muscle development as have the other areas of body. Calf augmentation is then requested to bring the calves into more symmetry with the rest of the body. Other men and women will have a genetic predisposition to thin calves and will desire a more rounded and fuller, even muscular, appearance to the calves.

Calf augmentation is achieved using a pair of implants in each calf. This surgery is performed as an outpatient but occasionally requires one nigh of postoperative hospitalization. The incision is made horizontally in the creases at the back of the knees. The implants are placed above the muscle to give a natural appearance. Patients will have some difficulty with ambulation and may require assistance in the form of a walker for one to two weeks. Most patients will take off at least two weeks from work. Sometimes the patients will make arrangements so that they can work from home a week following the surgery. Exercises involving the legs will not be resumed for at least four weeks. Active runners may find that it is at least eight weeks before they are able to return to running. The results of the operation will be more toned and muscular looking appearance of the calves at both rest and during activity.

If you would like more information about Calf Augmentation or to schedule an appointment, feel free to fill out our convenient contact form or call us directly at 301.982.0202.