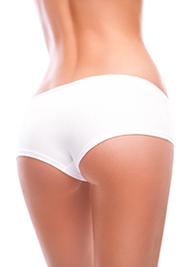 Buttock augmentation is a very popular procedure which Dr. Person has been performing for over 15 years. The explosion in its popularity can be traced back to the actress Jennifer Lopez, and more recently to stars such as Nicki Minaj and Kim Kardashian. People choose to have their buttock augmented or enlarged for several reasons including defining an attractive ethnic physique, restoring curves lost to pregnancy and aging, as well as to fit better in today’s fashion trend.

There are basically two ways to enlarge the buttock. You can either inject something into them, or you can place something in them.

This is the name given to the procedure where fat is removed by liposuction from unwanted areas (abdomen, back, thighs, arms, etc) and is injected into the buttocks. The process of liposuction contributes to the final results by contouring the waist and hips, therefore giving the patients natural buttocks, more definition, even before the fat is added. The fat is then injected into the buttocks and hips (if desired) according to the patient’s goals. Not all of the fat will survive. Dr. Person usually obtains survival rates of 60-80% of the injected fat.

There are several aspects of fat grafting which patients need to be aware of. First, it takes more fat than most patients think, to achieve the average result. Second, the patient must make arrangements so that they do not sit or lie on their back for 2-3 weeks after surgery. That means NO DRIVING during that time. If a patient puts too much pressure on the grafts, by sitting or lying on their back, they will cause more of the fat to not take, or die. If this happens they will have nice results at 2-6 weeks after the procedure, but then have little or no result at 6 months.

For patients who do not have enough of their own fat, or for patients who want more defined augmentation than their fat will allow, there are buttock implants. Dr. Person is one of a very few plastic surgeons that has performed many buttock implant procedures over the last 20 years. The implants are made of silastic which is a semi-firm, rubber-like material that cannot leak, unlike silicone gel breast implants. These implants give the buttock an athletic, muscular-like feel compared to fat injections. Dr. Person places the implants within the gluteus muscle or just above it beneath a layer of fascia. The intramuscular and subfascial locations have their advantages and drawback which Dr. Person will discuss with you during a consultation. The procedure is done under general anesthetic and usually takes about two hours. The incision is placed inconspicuously in the crease between the buttocks.

Most patients will take 2-3 weeks off of work for fat injection and implants placed in a subfascial location. For intramuscular placement of implants, the recovery is longest requiring 3-4 weeks of time off. Exercise can usually be resumed 4-6 weeks later. When planning to “show off” your new result (i.e. beach, swimwear), allow yourself 6-8 weeks.

If you would like more information about Buttock Augmentation or to schedule an appointment, feel free to fill out our convenient contact form or call us directly at 301.982.0202.