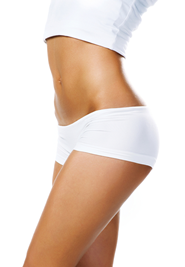 With the procedure called abdominoplasty, or "tummy tuck", a patient can realize the fullest correction of undesirable changes in the abdominal and torso area. These changes may have resulted from pregnancy, weight gain, development of laxity, or generalized aging. They may consist of excessive fatty areas, loose skin with stretch marks, an unsightly umbilicus, as well as unwanted fatty deposits in the hips and back areas. Many patients, in fact, will complain of the abdomen folding over when they sit down or put on a seat belt. In additional women will also complain of fullness in areas of the back below the bra strap. An abdominoplasty incorporates several techniques including liposuction to rejuvenate this area. For many patients, this surgical treatment when combined with a sensible diet and exercise regimen will yield an improved appearance to the abdominal area that will last for many years.

There are several levels of abdominoplasty surgery depending on the needs and desires of the patient. A mini-abdominoplasty is utilized in patients who are usually younger and have slight excess fullness of the abdomen without significant skin deformities such as stretch marks. This procedure usually takes 2 to 21/2 hours and leaves a small, horizontal scar just above the pubic area. In a mini-abdominoplasty no significant alteration of the umbilicus is performed.

With a moderate abdominoplasty, the scar in the lower abdomen becomes longer extending from hip bone to hip bone. This scar will still be hidden in most swimwear. In this procedure excess skin is removed and the underlying abdominal wall and muscles are tightened. Some alteration of the umbilicus is usually performed with this type of abdominoplasty.

With a full abdominoplasty, not only is the extended horizontal incision utilized but also greater modifications are done of the abdominal wall. By tightening the abdominal wall and muscles in the middle, there is a general flattening of the abdomen. Some patients are even candidates for an additional procedure called a corsetplasty, which actually narrows the width of the waist. In this procedure the umbilicus is actually moved to a new position after the extra skin is pulled down and secured in the lower abdomen. An abdominoplasty will take anywhere from 2 hours for mini-abdominoplasty to 31/2 to 4 hours for the more extensive abdominoplasty. Most patients having a moderate or full tummy tuck will stay one night in the hospital after the surgery for observation and pain medication. Usually a patient will take off two weeks from work activities following the more extensive abdominoplasty surgeries. Return to light exercise can be done as early as four weeks; however, more aggressive exercise would not be engaged in for at least six to eight weeks. During the initial phase of recovery, the patient will be given an elastic support garment which will be worn around-the-clock except for bathing. This helps to secure the adhesion of the abdominal skin and tissue in its desired location.

The surgical scars are the most prominent in the initial two to three months. These will gradually fade with time. For patients anticipating an event in which they would like to "show off" their new abdominal contour, it is recommended that surgery should be done at least two month prior to it. Although a patient will immediately notice a significant improvement in their abdominal contours after the surgery, with the passage of time further refinements and improvements will be noted. In additional approximately 20% of patients may desire and request additional surgery to touch up certain areas or to address new areas which concern them such as thighs, arms, or the back.

Who is a good candidate for a tummy tuck?

The best candidates for abdominoplasty are in good physical condition with pockets of fat or loose skin that haven’t responded well to diet and exercise. We can also help older, slightly obese people whose skin has lost some of its elasticity.

Abdominoplasty can also be useful for women with stretched skin and muscles from pregnancy. Results from the tummy tuck procedure will likely diminish if women continue to bear children, so we advise patients who plan to become pregnant to delay abdominoplasty.

We also encourage patients who intend to lose a lot of weight to wait before undergoing the procedure, since skin in the abdominal area typically loosens after substantial weight loss.

We take the time during every pre-operative consultation to learn what his patients want to achieve from a tummy tuck both for their bodies and for their self-confidence. By listening to what patients have to say and closely examining them rather than performing a one-size-fits-all procedure on every person, we provide patients with completely customized treatment that takes into account their specific goals.

Abdominoplasty takes approximately two to five hours under general anesthesia. Dr. Person will make two incisions: one from hipbone to hipbone close to the pubic area, and another around the navel. He will separate the skin from the abdominal muscles, which are then pulled together and stitched into place for a firmer abdomen and narrower waist. He will stretch the skin flap down and over the newly tightened muscles, remove excess skin, and reattach the navel in a natural position. Finally, he will close the incisions and apply sterile surgical dressings over the sutured areas.

A temporary tube may be inserted to drain excess fluid from the surgical site.

Recovery time ranges from two weeks to a few months.

Abdominoplasty will leave a scar spanning the lower abdomen from hip to hip. We are very careful to make the incision low enough for even a bikini to conceal the scar.

With a balanced diet and regular exercise, results are long-lasting.

Though rare, post-operative complications from surgery are possible. They may include infection, blood clots, and poor healing, which may require further surgery.

Patients who have had previous abdominal surgery should know that their old scars could be raised, stretched or generally more noticeable after the procedure. A scar revision procedure after abdominoplasty may minimize the appearance of an unsightly scar.

Partial abdominoplasty is similar to abdominoplasty except a shorter incision is made and the skin is only lifted to the navel, which does not have to be moved.

If you would like more information about Abdominoplasty or to schedule an appointment, feel free to fill out our convenient contact form or call us directly at 301.982.0202.