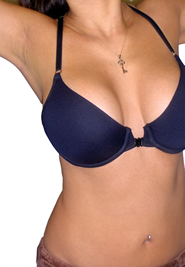 In breast reduction surgery two goals are achieved. The first goal is to lessen the size and the weight of the breasts which are often times perceived as extremely uncomfortable and burdensome by the affected women. The second goal is to restore a more youthful look by elevating the position of the nipple in most patients. This is a procedure, which in some cases, is Breast Reduction | Maryland | Washington DC covered under one's health insurance. The incision used in most larger cases involves a "anchor pattern" (an incision around the nipple area, an incision extending from the nipple to the bottom of the chest, and an incision along the bottom fold of the breast). In smaller cases a vertical scar technique can be used which does not leave the transverse scar in the fold at the bottom of the breast.

The procedure is usually performed in the hospital and takes approximately three to four hours. Some patients will elect to stay over one night in the hospital setting. The following day surgical drains are removed, and the patient may shower. Discomfort is moderate and usually lasts only three to four days. The patients usually return to work from anywhere from one to two weeks following this surgery. Light exercise can be initiated at two weeks, but aggressive exercises are usually postponed for at least six weeks following the surgery. The initial tightness and swelling noted in the early postoperative period will gradually give way to a more natural and soft appearance by six weeks.

Large breasts can cause pain, improper posture, rashes, breathing problems, skeletal deformities, and low self-esteem. Breast reduction surgery is usually done to provide relief from these symptoms. Performed under general anesthesia, the two- to four-hour procedure removes fat and glandular tissue and tightens skin to produce smaller, lighter breasts that are in a healthier proportion to the rest of the body.

Breast reduction surgery is not recommended for women who intend to breast-feed, since many of the milk ducts leading to the nipples are removed.

During the procedure an anchor-shaped incision is made from the new location of the nipple down to and around the crease beneath the breast. The surgeon removes excess glandular tissue, fat, and skin, relocates the nipple and areola, and reshapes the breast using skin from around the areola before closing the incisions with stitches. Liposuction may be needed to remove excess fat from the armpit area, and in some cases when only fat needs to be removed from the breasts, liposuction alone is used for breast reduction.

For a few days after surgery the breasts are bound with an elastic bandage or a surgical bra and you may be given surgical drainage tubes for fluid removal. Stitches come out in a week and the surgical bra must be worn for about a month.

A little pain is normal after surgery, whether it’s mild discomfort, swelling during menstruation, a measure of numbness or sensitivity, or random, shooting pains that may last for a few months. Swelling, bruising, crusting and slight changes in breast size are also common. Most patients return to work in about two weeks, although you should avoid heavy lifting for three to four and only gentle contact with the breasts should occur for six weeks.

Scars fade with time but will not disappear, although they can be hidden with a bra, bathing suit or low-cut top.

Risks are rare and usually minor but may include bleeding, infection, reaction to the anesthesia, small sores around the nipples, slightly mismatched breasts or unevenly positioned nipples, and permanent loss of feeling in the nipple or breast. 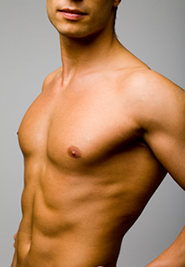 Gynecomastia is a term that is used to described abnormal female-like breast development in men. This process is usually seen in the middle to late teenage years of men. This can be a very distressing problem for young men, and they will often gain weight to help disguise it. In addition men will refrain from athletic activities and will avoid removing their shirts so as not to display this unusual appearance. The surgical procedure to correct this usually involves a combination of liposuction as well as direct excision. Scars are usually limited to the area just below the nipple as well as an occasional small incision in the armpit area. For more severe cases, more extensive incisions may be utilized; but this is rare.

Surgery for gynecomastia is usually performed as an outpatient and takes approximately two to three hours. Surgical drains are used, and the patient will be instructed in how to care for these during the first three to five days following the surgery. In addition they will be required to wear a custom-fitted compression vest at all times except for bathing for the first two to three weeks. This will help achieve the desired goal of a flat normal-appearing male chest. As with female breast reduction patients, men that undergo surgery for gynecomastia are some of the most satisfied patients treated by plastic surgeons.

If you would like more information about Breast Reduction or to schedule an appointment, feel free to fill out our convenient contact form or call us directly at 301.982.0202.